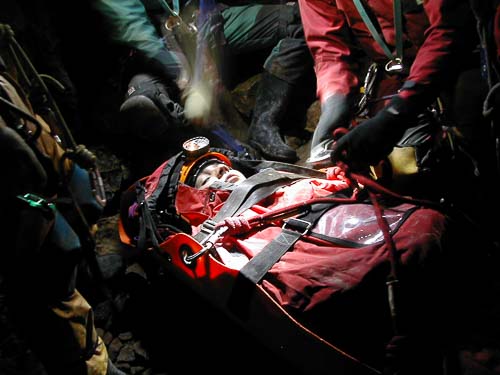 The Gloucestershire Cave Rescue Group (GCRG) was formed in 1962 by local cavers who recognised the need for cave rescue facilities in an area that was fast growing in popularity.

The Group has been called out a number of times over the years since its formation to rescues in the Caves and Iron Mines of the Forest of Dean, the Stone Mines of the Cotswolds. Assistance to cave rescue teams from South Wales with extended duration rescues in their area has also been provided. The Group also has a support role in assisting the Severn Area Rescue Association (SARA) and as a valuable manpower resource for the Police & Fire and Rescue Service.

A recent expansion of the Groups activities, in collaboration with the Mines Rescue Team and the local HSE Mines Inspector, has been the formation of a Mines Response Team  for the Free Mines (Coal Mines) within the Forest of Dean.

With the growth in caving as a sport and as an activity for youth / adventure groups, combined with the discovery and exploration of more cave systems (the area now boasts the 10th longest cave in the UK, approximately 14km in length), unfortunately, so does the need for a cave rescue group.

Today the Group has some of the most up to date rescue equipment available, all stored at its Headquarters located near to Cinderford, along with the groups Land Rover. The Groups direct response area has grown over the years to now cover the Forest of Dean; the Wye Valley; the Cotswolds; and parts of the Thames Valley extending to the Reading area.

The Group, from rescue members to wardens / committee members are entirely voluntary and has no subscriptions. A small grant is received each year and support is also provided by the Mountain Rescue Council. Primary funding is achieved through donations combined with fund raising activities organised by the members. The Group has Charity status.

Membership currently stands at c100 people, all of whom are primarily sport cavers. The Group has a training programme which aims to ensure that all members reach a minimum level of cave rescue knowledge and experience. Those who wish may expand their knowledge and expertise to specialise in certain areas of rescue and take a more active role within the group.

Training takes place throughout the year on a quarterly basis and this can involve both surface and underground sessions. Combined training with other cave rescue teams also takes place. Recent developments have seen a major increase in training with the other Emergency Services (Police, Fire & Rescue, Ambulance and Mines Rescue). Training is also co-ordinated through the local caving clubs during the periods between the quarterly sessions.

The Group produces a periodic newsletter, which is distributed free of charge to the membership and holds various social events throughout the year.

Members are covered by the Mountain Rescue Councils £5 million third party insurance policy for all aspects of the Group's Activities.

The following video (by Nicky Bayley) gives an introduction to cave rescue:

A number of press clippings and media reports are also available.
Copyright © 2021 GCRG